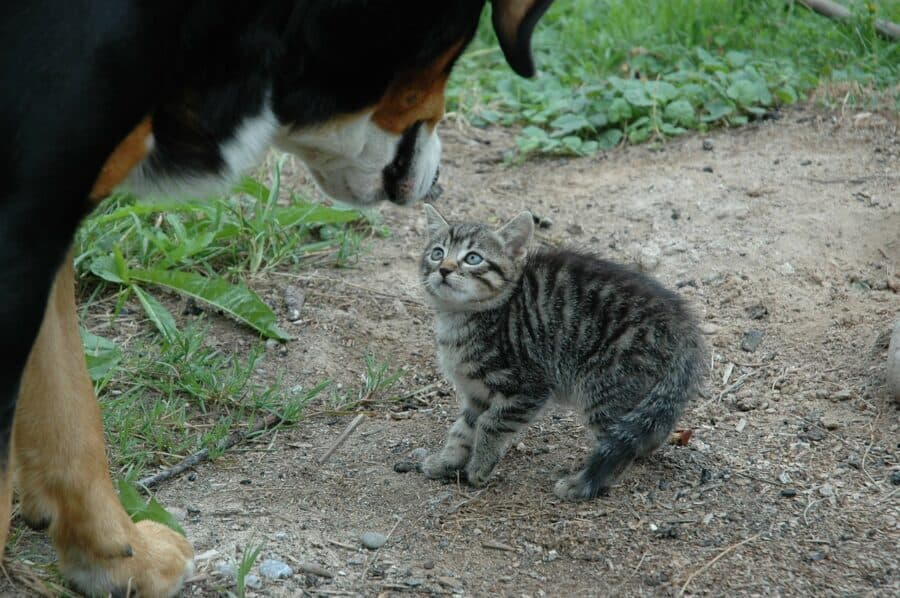 Those who have a dog as a pet sometimes become concerned about their behaviors. Even if a dog is a very calm and sweet loving pet, they are not always the same. There are many occasions when they show great aggression toward someone or something. In a blind view, it may seem like they do that for nothing, but speaking of the truth, many things enrage their behavior.

It would a thousand line talks if we want to cover them all up, but here we will talk about how to tell if a dog is aggressive towards cats.

How to tell if a dog is aggressive towards cats

A dog’s aggression toward a cat would sound pretty common, but it doesn’t always happen. But when it happens, the situation gets pretty ugly. So, here let’s talk about their behavior and some measure you can take to control the situation.

However, we should know the first thing that some of the aggressive signs will indicate something wrong.

It is the most common way of os, showing aggression for most of the animals. Growling with different types of deep sounds which a way of sending a threat to the opponent.

Like other animals, a dog does not star attacking suddenly. It shows different growling with their voice to deal with the situation. They show something about to happen if things don’t get sorted out.

Among much aggressive show-off, a dog used to pin down its ear into backward. Maybe you have not noticed, but when a dog tries to something usual, or they are about to do something aggressive, they often have pinned ears that indicate it’s behavior choice at that moment.

Many of us have gotten a bad memory if this posture, of course. A dog shows its fearsome aggression by barings its teeth continuously.

It is the most aggressive sign for a dog when it is just about to start the attack. Different bitting posture shows that the dog is so aggressive that it is ready to tear apart its prey. Sometime it may be just a threat. The situation is always critical when a dog show this behavior.

Tail movement is another visual sign of how an animal feeling. As for dogs, it is the same. When a dog is feeling good, its tail movement gets pretty fast for enjoyment. But when a dog gets angry with something, the movement becomes different; it’s rather straight up and slow.

A dog never takes its eye off from their pray. If they are angry about something or someone, then they will look at it without any blink. A dog has a different gaze when it is about to aggressive and crazy. It is like all the other animals, the look of their eyes become vicious and calm.

Aggressive Situation toward a Cat

Dogs are placed higher in the food chain comparing a cat. So, it is logical that a cat might be the prey for a dog. Although we don’t see a dog attack a cat regularly, it happens quite a lot. Physically a dog is much stronger than a cat. A dog can escape from a dog using its instinct or reverse aggression, but if there is a fight, then a dog is likely to win it.

So, talking about all these, there can be situations when a dog can get aggressive toward a cat, and you can identify it from their movement and behavior.

Eating: Those who have dogs and cats together as pets can see some kind of aggressive moment during eating. It can be a dog sneaking into a cat’s bowl or another way around, but it can happen pretty often. You can realize that from barking or growling.

If something happens unpleasant and you’ve noticed it, you will identify all the pre-engaging aggression from a dog toward a cat. If it is your pet dog, then try to calm it down in your way. As your pet, you should have some kind of training or connection between you two to get your dog under control.

A dog pretty much follows their owner as their master. So, try to look after them as much as you can to prevent any sudden aggressive situation or accident. Try to check their health regularly from a vet so that if there is any health is sure that can lead them into a brawl, then it would be much easier to prevent that.

In the final word, we have tried to help you with our assistance on how to tell if a dog is aggressive towards cats. It would not only help you to understand your dog’s situation but also prevent any harm to other pet animals like a cat.

So, try to take care of your dog as much as possible. They are very sweet and loyal animals. An aggressive brawl can harm them too. You should understand them and do your best to keep them safe.

1 thought on “How to Tell If a Dog Is Aggressive Towards Cats? Must Read Guide”