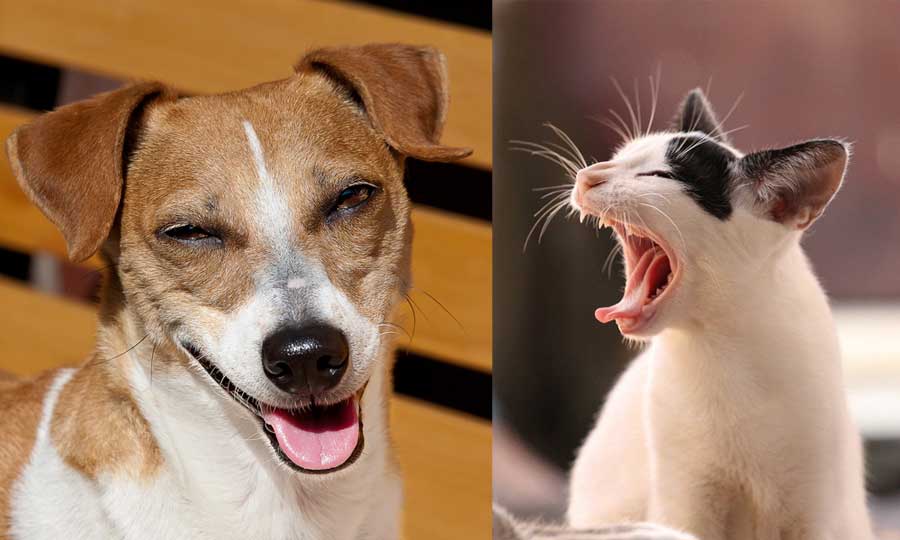 Introducing a Jack Russell to a cat is a common query amongst the dog and cat owners. Isn’t it?

You might be thinking of bringing in a new companion for your pet. But the big concern is if they can coexist with each other. Right?

Jack Russell and a cat should not live together because Jack Russells are mainly hunting dogs and are very aggressive towards smaller animals.

But in reality, it is not uncommon to see Jack Russells and cats living together under the same roof. If you can socialize and take some necessary precautions, the coexistence of a Jack Russell and a cat is very much possible.

What are the things you need to do? Well, in this guide, we bring you a complete guide on how to introduce a Jack Russell to a cat.

Without any further ado, let’s dive right in:

Can Jack Russells and cats coexist?

Jack Russells were originally bred as hunting dogs and were used for hunting small animals like rats or foxes. As a result, this breed of dog is very aggressive towards smaller animals and likes to chase them around.

As you can see, they are very vicious by nature. But assuming that they cannot live along with a cat is not entirely true.

Cats are generally afraid of dogs and like to stay away because of their defensive nature.

And as we know, all dogs are very social towards humans and animals alike. So, you can expect Jack Russell to grow a loving bond with a cat. Got it, right?

Guide on how to introduce a Jack Russell to a Cat

You might be wondering what difference does it make? Who is introduced to whom should not be that important, right?

The next part of this article might surprise you because the results can be drastically different in both cases.

Let me be clear with you from the get-go. Bringing in a new cat into an established Jack Russell’s environment is not the best idea.

Well, this situation can be very difficult to deal with depending on the nature of your dog. It is not uncommon for a Jack Russell to kill a smaller cat due to the lack of supervision.

However, all Jack Russells are not the same. Your dog might not have any interest in chasing cats around.

But no matter how friendly your dog is, do not make the mistake of leaving your dog and cat on their own because doing so might have consequences.

Besides, there are a few things to consider if you are thinking of bringing in a cat. Here are some:

The age of your dog

When introducing a new cat, the age of your Jack Russell can be very important.

The best time to introduce a cat to a Jack Russell is when the dog is very young. It is easier to socialize them when they are young. Growing together from an early age can create a strong bond.

You can also introduce a new cat to an old Jack Russell. Because Jack Russells are known to be very energetic, and cats can perceive this as hostile behaviour.

If your dog is old, it is likely for it to be not as active as young ones and be less aggressive towards smaller animals.

If you want to introduce them in between this age, you will have to face the most difficulty. Jack Russell is extremely aggressive and energetic during this middle age, and this aggressive nature can hamper the socialization process.

Does your Jack Russell have previous hunting history?

Well, it is really important to know how your dog reacts to smaller animals around it, especially cats.

It is a common practice for Jack Russells to be aggressive towards smaller species. But keep an eye on how they react around cats or any other animal in general.

Compared to other Jack Russells, is it more aggressive or less aggressive? Does it take part in hunting rats or foxes around the house?

If your dog is very aggressive and shows signs of hunting, it is best to not bring in any cat.

One the other, if your dog is calm and has no history of hunting, you may consider bringing in a new cat. But you still have to be very cautious about them and keep them under constant supervision.

Introducing a Jack Russell to your house cat

To be honest, this process is much easier and natural.

Cats are very calm animals and like to have their own space. They tend to attack only when they feel threatened.

Naturally, cats are afraid of dogs. They can perceive the playful nature of dogs as hostile behaviour.

But if the dog is younger and smaller than the cat, it will not feel threatened by this as it would in the case of an older dog.

Moreover, it will also be easier for the cat to get used to this behaviour if the dog is introduced from a very young age.

Socializing a Jack Russell is more natural if it is still a puppy. As it will grow up together with the cat, they will form a loving bond and consider each other as family. It will be easier for the dog to accept the cat’s presence too.

After reading through all that, there is only one topic left to discuss. That is, what is the ideal environment for a Jack Russell and a cat, and how can you make them live together?

You have come this far. Might as well enrich your knowledge a bit more on this topic. Right?

Creating the ideal environment for your Jack Russell and Cat

If two animals that are known to dislike each other are living under one roof, they will need the right environment for that.

Here is how you can create a friendly environment for both Jack Russell and the cat:

Preparing them for the first meeting

Before introducing a Jack Russell puppy to your cat, you should make the cat get used to the smell of the puppy. You can do this by using a blanket previously used by the puppy. This process is called desensitization.

You should also do it before bringing in a new cat to the dog’s environment as well.

Well, that’s all we have on how to introduce a Jack Russel to a Cat. As you have come this far of this guide, we expect you to understand the whole procedure and what you need to do.

Thank you for having the patience to read through all this information. Hope you found it interesting and helpful!

PetsCareHQ is a participant in the Amazon Services LLC Associates Program, an affiliate advertising program designed to provide a means for us to earn fees by linking to Amazon.com and affiliated sites.
Scroll back to top
2 Shares
Tweet
Share
Share
Pin2
We use cookies to ensure that we give you the best experience on our website. If you continue to use this site we will assume that you are happy with it. Privacy policyACCEPT