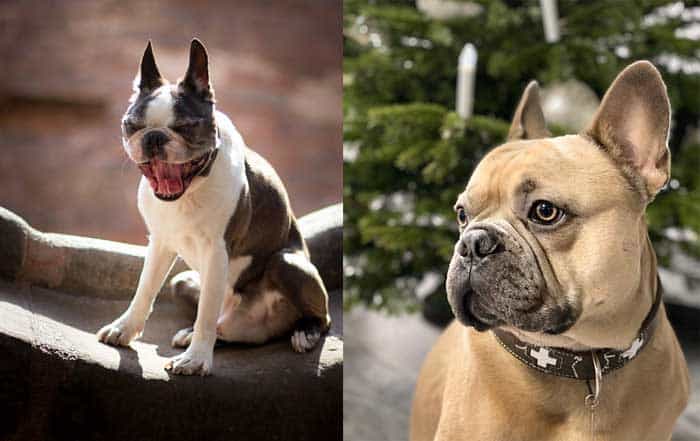 So, it has been a long time since you have been nagging to your parents to buy you a pet dog, and finally, they have agreed to your request. But only under one condition, you can only have one pet dog, and you need to take care of it yourself.

Now all of a sudden, the idea of having a pet has become much more complicated as you have to find the perfect pet between a French bulldog vs Boston terrier.

Though similar looking French bulldog and Boston terrier are quite different and have their distinct characteristics. If you are one of those people facing trouble choosing between them, you are in the right place.

This article discusses French bulldog vs Boston terrier and all you need to know about them. But before comparing these two breeds of cute dogs head to head, let us get a brief knowledge about them.

What is French Bulldog?

The French Bulldog is widely known as amiable companions towards humans and is a suitable option for your home.

Though named “French” Bulldog, these dogs are a crossbreed of two dogs from different countries. During the 1800s, they were first bred from English Toy Bulldogs and French local Ratters.

French Bulldogs are adorable from the moment they are born. These dogs love humans, are friendly and well mannered.

They come in a variety of colors and are quite popular worldwide as domestic pet dogs. According to the American Kennel Club, the French Bulldog ranks second in popularity in 2019.

What is Boston Terrier?

Widely known as the “American Gentleman,” the Boston terrier originates in the United States of America for its unique pattern.

They are tiny in size and shape. Even its body parts are individually relatively small. The small nose of a Boston Terrier contributes to its low life expectancy.

Though showing stubbornness sometimes, the Boston Terriers are generally friendly and trainable. They rank as the 21st most popular dog, according to the American Kennel Club.

Now that you have a general idea about these two breeds let us compare these two to point out their differences and similarities.

The french bulldog and the Boston terrier are indeed very similar in terms of looks. Despite their visual similarity, they can be quite different from each other.

We have divided this segment of the article into a few parts. This method will help in providing you a better understanding of their similarities and differences.

History of These two Dog breeds

Though similar looking, the French bulldog and the Boston terrier have different origins and show various characteristics.

History of the French Bulldog

In the mid-1800s, lace makers came to France during the Industrial Revolution and brought toy bulldogs with them.

The bull battling being banned in 1935 left many unutilized bulldogs, which also contributed to this.

These toy bulldogs then engaged in breeding with various dog breeds like pugs and terriers from France’s streets. This breeding process gave birth to a new breed of bulldogs named “French Bulldog.”

The French bulldogs are known for having bat-like ears compared to the rose ears of regular bulldogs. Since then, the French bulldog has become one of the most popular dogs around the globe.

History of the Boston terrier

As the name suggests, the Boston terriers originate from Boston, Massachusetts. In the 1800s, bulldogs were used for bull battling.

Gradually, they were cross-bred with other dog breeds and contributed to modern Boston terriers’ looks and characteristics.

We are giving you a general idea about the size of a French bulldog and Boston terrier. It surely does not apply to every single one.

Because like every other living animal, these dogs can vary in size despite being of the same breed and origin.

Both the French bulldog and Boston terrier have a similar size and have a small physical stature. They have little eyes, ears, noses, and tails.

When it comes to height, the Boston terrier has a slight advantage over the French bulldog because of their long legs.

The French bulldogs have a muscular build, resulting in them being broader and more weighty than the Boston terrier.

Also, the French bulldog’s average weight is around 16 to 28 pounds, and The average mass of the Boston terrier is approximately 12 to 25 pounds.

You already know about the height and weight difference of the French bulldog and Boston terrier.

But there are also other distinct features like eyes, nose, ears, and tails. We are going to talk about all these differences in this segment of the article.

You already know about the similar looks of these two breeds. But do they behave similarly, or are they different in this regard? Continue to read this article about french bulldog vs Boston terrier to find it out.

The Boston terrier is quite unpredictable when it comes to temperament, which is a common trait. Each dog of this breed shows diversity in its behavioral pattern.

Sometimes you will find your perfect companion in a Boston terrier. It will play with you, run around with you, and become very excited to your mere presence.

Other times you will find a moody dog that loves to have its personal space. You can not expect certain behaviors from this breed, and their behavior pattern is random.

Though they behave unpredictably, you can still find some common traits in them. Your Boston terries might not jump in happiness when it sees you, but one consistent thing is its love towards you. Every dog of this breed loves to stay around its owner.

Boston terriers love attention, and it is not limited to just its owner. A Boston terrier is friendly and can befriend anyone in no time.

They are also really good with children and cats. These dogs have a mild temper and can be very loving towards kids and other animals.

Though they are friendly, it is good to be cautious when having kids around them. Dogs are not humans and can cause damage if it feels threatened in the presence of someone.

The main reason behind it being so low on the American Kennel Club’s popularity ranking is its unpredictable nature.

People like to know what to expect and what type of dog they are getting beforehand. All the dogs can indeed be surprising, but the unpredictability is more common and prominent for the Boston terrier.

Earlier, we mention that the French bulldog is second in popularity, according to American Kennel Club. The main reason behind this high ranking is its mild temperament and loving behavior.

The French bulldog can be a great companion for your morning walks. It can never get enough love and attention unless it is sleepy, of course.

They love not only their owners but also others as well. Also, they will have a great time if anyone plays with them.

As they are well tempered and loving, they are very good with children and other pets in your house.

Though it is better to introduce them to other pets at a younger age, they learn to coexist with other pets if you give them enough time to adapt.

Both the Boston terrier and the French bulldog is trainable, the latter one being a bit stubborn.

The best time to train your dog is at a young age as when they are younger, they welcome changes. The dogs become more stubborn as they age.

While it is still possible to train a Boston terrier even at an older age, the same can not be said for a French bulldog.

If you have a French bulldog, make sure to train it to your likings at a younger age. Otherwise, you might not be able to train it at all.

While It is true that how much training you can do depends on the dog itself, not its breed but generally, the Boston terrier shows better willingness to be trained than the Frenchy.

This breed of dogs requires a moderate level of regular exercise. But compared to the French bulldog, the Boston Terrier is more active. It can be your running partner and fetch a ball you throw.

But too much activity is not suitable for them because of their small nose. A little nose can cause a Boston terrier to overheat. So, it is better to look out for your dog if it moves a lot.

You can play around with a French bulldog, but it is less active than a Boston terrier. The reason behind it being less active is its muscular and broader build.

French Bulldog loves eating a couple of times a day. Food habit changes might cause issues like producing gases or farting so much. So be careful at the time of serving a new food brand.

Also, the small legs also contribute to this. But do not get discouraged from this because a Frenchy can be as playful as a Boston terrier.

The reason for them being so expensive is the breeding process itself. Previously we mentioned that both these breeds are crossbreeds.

Both of these breeds are equipped with a smaller nose making them more vulnerable to health issues. But despite that, they still live for a long time.

In this article, we have tried to gather all the necessary information to have a clear idea about French bulldog vs Boston terrier.

Both these breeds are good as companion dogs for your home and are quite well tempered and loving as well. A Boston terrier’s characteristics can be random for each dog, but both these breeds love attention.

We wish reading this article helped you, and you are finally set to buy that pet dog you desired for all these years!